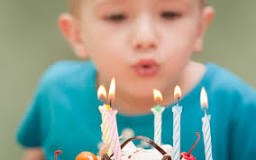 We all love singing happy birthday songs and wishing for a healthy and prosperous year ahead for the birthday boy or girl. They blow out the candles on the cake and make a wish. But why do they do that? Blowing candles? Is that some kind of tradition or a habit that somehow have been passed on generations to generations and some millennial thought it as a cute little habit and it spread out wildly until it appeared on every single person’s Instagram feed?

Let’s take a look at how did this habit came into being.

If you have heard about the Greek goddess Artemis, then you will understand why they used candles. Artemis is the name of the moon goddess in the Greek philosophy. Greeks would bake white and round cakes in order to pay their tribute to the goddess and candles were lit to represent the brightness that the moonlight spreads in the darkest of nights. Honestly, this is a pretty good explanation as to why the candles became so popular around the world.

Where as, if we look at the religious side, Germans used candles to symbolize the ‘Light of Life’ which every new birthday brings.

Other than that, there are some theories related to the smoke of flames in the candle. They also believed that the smoke little candles create are a medium that carrys the wishes to God which would make them fulfill quicker than expected. Or those smoke is the evil spirits that lurk around the birthday child which is later blown by the kid into the thin air.

Some believe that birthday candles blown in a single breath would make wishes come true, while if the wish is shared with someone, it may not come true.

The key is to make a wish before blowing the candles and maybe if you follow all the steps, you can receive what you wished.

Coming back to the 21st Century, kids birthday cakes Dubai still hold candles which are blown by them. Some still believe in these superstitions while others are doing this just for fun.

Tell us your theories as to why you think these candles are blown and if any of the above ones are true.

And remember the old Chinese saying “Be careful what you wish for. It might come true.”

See it here for more info.